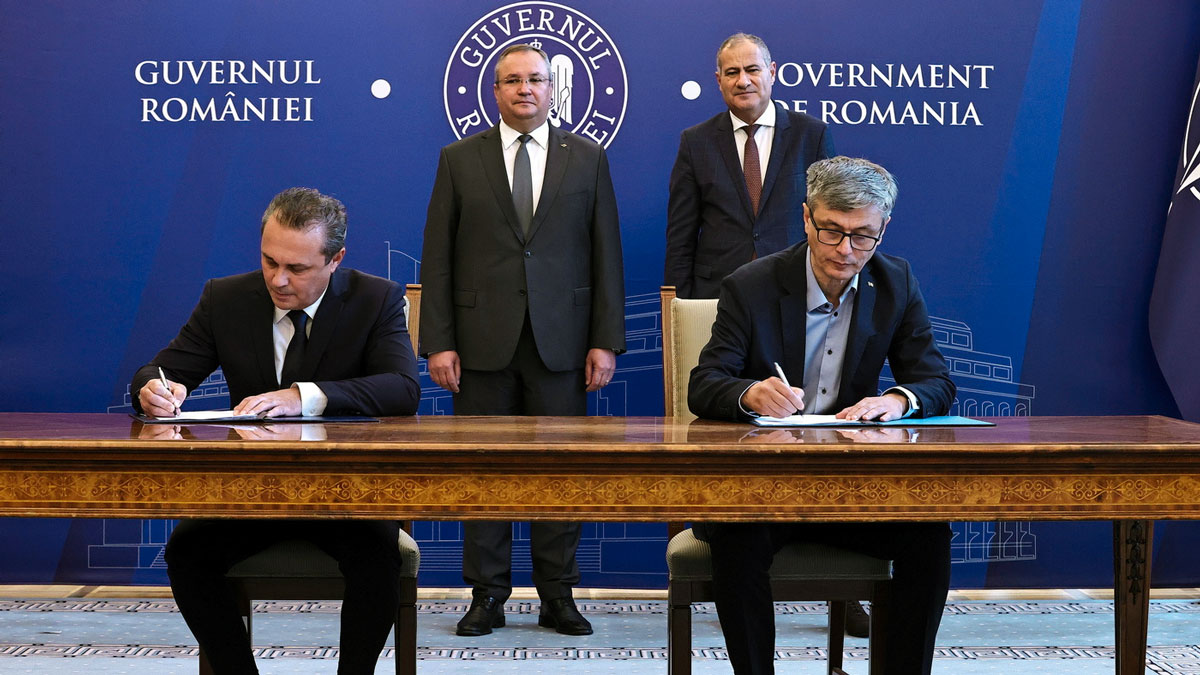 Romanian Prime Minister Nicolae-Ionel Ciuca witnessed the signing of the first nine financing agreements of the Modernization Fund, in order to implement investment objectives of particular importance for the development of the national energy infrastructure.

The agreements were signed between the Ministry of Energy, as the national authority for the implementation and management of the funds allocated to Romania by the Modernization Fund, and the national electricity grid company Transelectrica SA, as as a national power system (NPS) transmission and system operator.

The event brought together Energy Minister Virgil Popescu, Secretary General of the Government Marian Neacsu, Chairman of the Board of Directors of Transelectrica Gabriel Andronache.

The non-reimbursable value of the nine investment projects to be implemented by CNTEE Transelectrica SA, from the funds allocated to Romania from the Modernization Fund, is EUR 424,404,842.98.

“Today we signed the first grant agreements for the Modernization Fund, opening the most important line of European funds for the development of the Romanian energy sector. With a total value of more than 13 billion euros, thanks to this financing, we will significantly transform the national energy infrastructure, a decisive factor in achieving Romania’s energy independence. Solutions to protect citizens and the economy from the effects of rising prices are complemented by investments in strengthening energy infrastructure and increasing production capacities. The government, through the Ministry of Energy and responsible institutions, remains committed to its efforts to ensure affordable energy for Romanians and the national economy,” said Prime Minister Nicolae-Ionel Ciuca.

“We continue to invest in the development of the national energy infrastructure. I would like to thank the colleagues from the department for their efforts to operationalize the Modernization Fund. And today, by signing the nine grant agreements, we are taking concrete steps in this regard. I wish Transelectrica every success in finalizing these very important investment objectives, which will ensure our energy security and independence,” said Virgil Popescu.

“Today marks an important moment: the amount of more than €424 million represents the largest EU financial support obtained over time by Transelectrica, in the context where the total value of the development plan PTG is around 2 billion euros. The complexity of the projects to be financed proves the commitment of Transelectrica, a company of national and strategic interest, under the supervision of the General Secretariat of the Government, for modernization. We have achieved this achievement thanks to an excellent collaboration with the Ministry of Energy, which has promoted Transelectrica’s projects, understanding the importance of developing Romania’s electricity transmission infrastructure, especially in the international context. current. At the same time, I congratulate Transelectrica colleagues for attracting these funds,” said Marian Neacsu, Secretary General of the Government.

“The implementation processes of the nine investments financed by the Modernization Fund put Transelectrica on a different level of performance, contributing to the development of the company’s status in a national and regional context. The fact that we obtained 30% of the financing approved for Romania is a concentrated effort of expertise, experience and involvement of Transelectrica’s specialists. This collection of large, complex projects demonstrates the Company’s long-term commitment to achieving European energy security objectives. We have achieved this achievement with the support of the Romanian government, thanks to an excellent collaboration with the Ministry of Energy, which has promoted Transelectrica’s projects at the highest level, understanding the importance of developing the transmission infrastructure of Romania’s electricity, especially in the current international context,” said Gabriel Andronache, Chairman of the Board of Transelectrica.

The nine projects that received funding from the Modernization Fund are:

The investment objectives, whose financing requests have been approved by decisions of the European Commission, will lead to the modernization of electricity transmission capacities and the improvement of energy efficiency, thanks to the construction of new overhead power lines and their interconnection with the NPS, the construction or modernization of certain new power stations, the optimization of the operation of certain overhead power lines, in particular through the installation of online monitoring systems of the Smart type Grid and digitization of the electricity transmission network.

At the same time, the projects financed by the Modernization Fund will contribute to increasing the interconnection capacity with the European energy system, as well as to the development of Romania’s electricity transmission network, respectively to security, flexibility and adequacy of the national energy network System, offering the premises for the commissioning of new renewable energy production capacities.

More specifically, the main benefits of these investments will materialize through relevant indicators such as: the increase in the transmission capacity of the electricity transmission network by approximately 1700 MW, the construction of nearly 480 km of new overhead lines , the extension of five 400 kV substations, the renovation in a digital concept – a first in Romania – of the Alba Iulia substation, the increase in the interconnection capacity with 600 MW (cumulative to borders with Hungary and Serbia), the implementation of power quality monitoring systems in 15 substations and the optimization and monitoring of overhead lines by digital systems.

The modernization fund is a financing instrument made up of the income obtained by auctioning on the market 2% of the total greenhouse gas emission allowances, on the basis of the provisions of the EU-ETS directive and has, as the implementation period, the 2021-2030 Time Range.

Romania has allocated 11.98% of the total of 2% of the total quantity of allowances for the period 2021-2030, which represents more than 15 billion euros, an amount that it can use to finance investments.